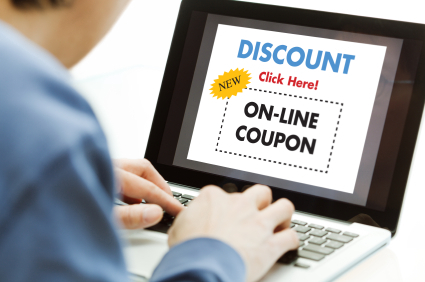 Ah, coupons!!! There’s nothing better than finding a discount to your favorite restaurant, spa or clothing store. Coupons have been a favorite trend for years, but the days of clipping coupons from the Sunday paper are over!

Times have changed. The coupon trend has finally gone viral. Coupon and deal websites such as Groupon, Sharing Spree, and Living Social have made coupon searching a breeze. Just head to their websites and sign up for your city and voila, you will have daily deal coupons in your e-mail box each morning with up to 70 to 80% off its retail value!

Online coupons have created an even bigger buzz recently by offering quick and amazing deals to companies like The Gap, Macy’s, Amazon and Apple. Most coupon sites use the quick response and call to action strategy. They give the customer exactly what they want by offering amazing deals daily that no one can pass up.

In January 2011 Living Social may have created the biggest coupon selling sensation when it offered a $10 Amazon gift card. The site sold over 1.3 million vouchers in a 20-hour period. The news about the offer spread like ‘viral’ wildfire on Facebook and Twitter. I wonder if Amazon even has interest in Living Social?

Groupon, the largest coupon site today, gained popularity by offering exclusive discounts to different cities in the U.S. and has now expanded worldwide. Last year Groupon offered daily deals to top salons handpicked by InStyle magazine. What makes Groupon stand out from its competitors is the personalized deals being offered to customers. Customers receive a newsletter as well as other emails with coupons to places that pertain to their age and previous coupons purchased. Forbes magazine called Groupon “the fastest growing company ever.” Groupon has reportedly been offered a $6 billion deal by a little Fortune 500 company called Google.

So, we know Groupon and Living Social are the major players. But, a new up-and-coming website called Sharing Spree (formerly myEZdeal) re-launched in January 2011. The company offers coupons similar to Groupon and Living social focusing on: Restaurants, Bars, Spas, Classes, Retailers and Salons.

For all of us who enjoy a good deal—we say thank you to Sharing Spree, Living Social and Groupon and all the other little deal sites!